When Canada’s Liberal government was elected in 2015, they promised to repair the extensive damage inflicted on environmental laws and policies by Prime Minister Stephen Harper’s government. In early February, bills introducing changes to the Fisheries Act, National Energy Board Act, and Canadian Environmental Assessment Act were introduced.

Hosts: This event is co-hosted by the UBC Liu Institute for Global Issues and UBC Master of Public Policy and Global Affairs Program

This seminar will not be filmed. 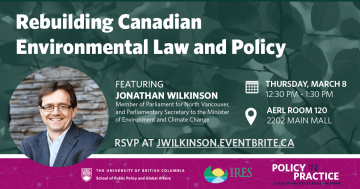