Note: This seminar will not be recorded.

Reflections on COP26 in Glasgow: What Happened and What’s Next for Canada’s Climate Policy and Economy

Kathryn Harrison recently attended COP26 in Glasgow as one of eight UBC delegates (live tweets from @profkharrison), and previously attended COP25 in Madrid.  She will reflect on her attendance at COP26 in Glasgow, which followed the first working group report from the IPCC’s sixth assessment, and was the first critical “ratchet” period where countries are expected to increase their target ambition under the Paris Agreement. What happened at COP26 and what’s next in international negotiations in the context of the Paris Agreement? What are the implications of COP26 (and COP27 this year) for Canadian climate policy and for Canada’s economy, especially fossil fuel exports? 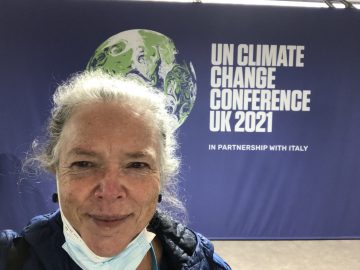 Kathryn Harrison is a Professor of Political Science at the University of British Columbia. She received Bachelor’s and Master’s degrees in Chemical Engineering before completing her PhD in Political Science. Before entering academia, Dr. Harrison worked as a policy analyst for both Environment Canada and the United States Congress. She has published widely on Canadian and US environmental and climate policy. Dr. Harrison has advised governments from the local to international level, and is currently chair of the Expert Advisory Panel on climate mitigation of the Canadian Institute for Climate Choices.